August 29, 2014. Friday. The best day of my life followed up by one of the worst. If I even did fall asleep last night it wasn’t for very long. I was still on some type of adrenaline from the birth of my first child, my son Luca. This morning consisted of more of the same, going to check on Megan and Luca and most of my time taking photos and videos. Just two nights ago I saw a video my dad took of Luca that morning and it seemed like a normal day, or as normal as it can get for having a child who just had open heart surgery.

That afternoon Megan needed someone to go back home to pick some things up that we didn’t think we needed or didn’t think we would be able to use. Her parents and my dad offered to drive and stuff up the list of things, but I didn’t want anyone to have to deal with that infamous LA traffic. On the drive home it hit me that I had become a father. During that drive I listened to “stay with me” by Sam Smith 20 times and belted out the chorus every single time even if it was out of context I could relate to some of the lyrics.

” Oh, won’t you stay with me?
‘Cause you’re all I need
This ain’t love, it’s clear to see
But darling, stay with me.”

Once I got home I was by myself and took a moment to myself on the couch and I let out all the tears I had held in since finding out Luca had a heart defect at our 19 week ultrasound. I lived the following 18 or so weeks after Luca was diagnosed with HLHS living with the unknown and asked multiple times of we wanted to terminate the pregnancy. I said a prayer and a thank you after a few minutes of just reflecting. I gathered myself and wanted to do something special for Megan and got this carousel picture frame from our house and wanted to go print photos of Luca to put in it. I went to cvs, then Walgreens, and then another cvs. Nothing worked and I got zero photos printed. While at the CVS closer to the hospitals and my last resort I got a call from Megan’s mother and she said that Megan was having a hard time and just needed me there. I think the day before finally got to us both.

I went back to Megan’s hospital first when I returned as we tried to console each other. I told her I would go back to Luca and would FaceTime her when I got there. I started the trek back to CHLA and passed my dad who was reading the paper in the waiting room there. And then my worst dreams flashed right in front of my eyes. Trying to buzz in to get back into Luca’s hallway there was nobody answering through the intercom. As I’m looking through the glass window down the hall there’s an emergency going on so lights are flashing and sirens ringing, which meant a child had coded and need medical attention. Everyone was running in the direction of Luca’s room. I let myself in the hallway at this point and ran down the hall to see them running into my sons room. There were already 6 or more doctors and nurses in the room and Megan’s dad was pinned in the back corner. I almost dropped to the floor as a nurse set me down into a chair outside Luca’s room at the same time my dad walks around the corner. A doctor pulls myself, my dad and father in law away from the scene and into a room down the hall to explain what had just happened. Luca’s heart was crashing and he would need to be put on life support. The words that hit me hardest were when the doctor said “Luca is the sickest child we have in this hospital right now.” While we’re in the back room and hearing the next steps to Luca’s survival, I’m getting numerous calls from Megan who had been waiting to FaceTime, but I couldn’t answer then. She kept calling me and her dad and then my dad as if she knew something wasn’t right. My dad answers and she knew something was wrong but I wanted to see her in person to explain the very little that I even knew and understood.

We told her that we were coming back to her hospital, which is probably a 10 minute walk through all the halls and elevators. We get back to her hospital and just entering the floor she was staying on I heard her screams of “is he dead?” I can hear the panic and concern in her moms voice telling her “no he’s not” to try and calm her down. She had given birth barely 24 hours ago and couldn’t even sit up let alone leave the hospital and she wasn’t supposed to leave for another 3 days. She was determined to get out of that hospital to see her son alive though as they were already performing his second open heart surgery in 2 days. While discharging from the hospital and waiting for the elevator they are still pulling tubes and fluids out of her body as we push her away in a wheelchair. We get her over to CHLA where she can finally see Luca in person, now after having had 2 heart surgeries in just over 24 hours, on life support, and no longer having a pad cover his chest. They didn’t cover his chest so it was faster to get to his heart if they needed to intervene again. So now you could see the inside of his chest and his little beating heart.

Somehow Megan stood up out of her wheelchair and stepped over to Luca’s bedside and for the first time she got to speak to him. He did the same he did for me and opened his tired eyes immediately. He knew the voice of his mother and father, and for a small period of time we felt that as a sign of comfort. The rest of the day was spent taking photos as a family and just spending time together. At this point all of Luca’s medicines and life support machine crowded his small hospital room.

That night my dad slept with Luca and Megan’s family and I went a block away to the Ronald McDonald house so she could try to sleep and continue to recover in bed. What was supposed to take 3-4 days recovery in a hospital turned out to be 24 hours in a hospital for her and now we were on our own. That was a price we had to pay so that she could see her son. The worst day of my life thus far ended and again with little to no sleep as I was worried about what was to come.

Morning photo of Luca still with a pad covering his chest 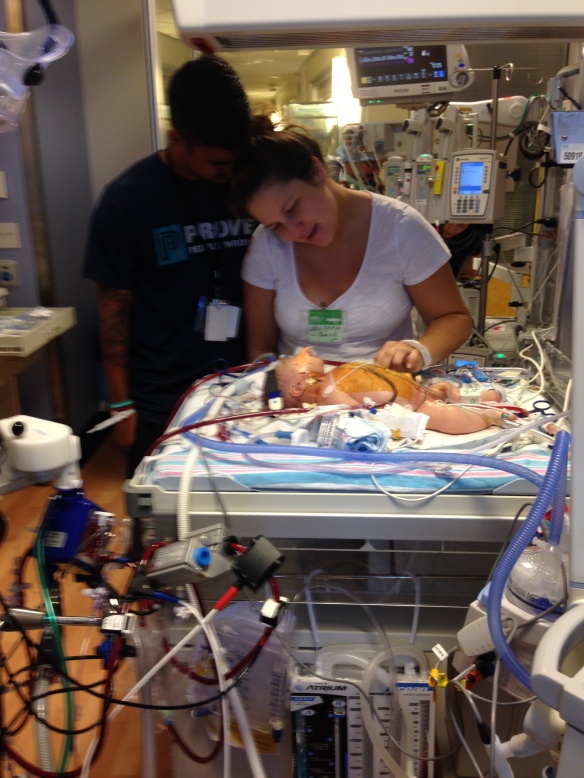 Megan seeing Luca for the first time since he was born 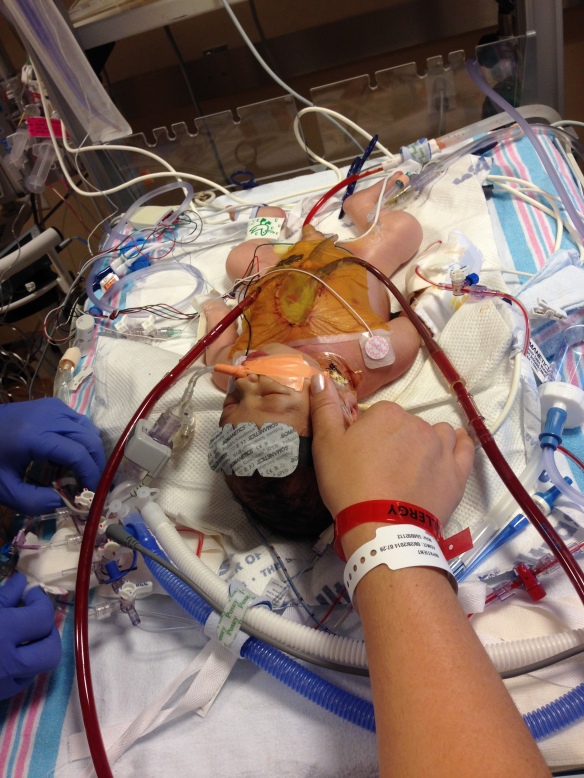 Luca and Megan. He no longer has a cover over his chest